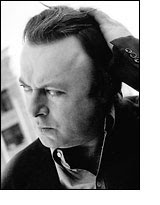 
Joseph Wilson's Revenge
Why no special prosecutor for the latest CIA leak case?

If Mary O. McCarthy should ever be so desperate as to need a character witness, or to require one so badly that she must stoop to my level, I declare in advance that I shall step forward pro bono. I am quite willing to accept that whatever she did or did not do or say about the surreptitious incarceration of al-Qaida suspects overseas (and let's not prejudge this), she did it from the most exalted motives.

I accept this because, however much of her hard-earned money she threw away on making a donation to the John Kerry presidential campaign, she is obviously more than a mere partisan. Back in 1998, she wrote a formal memo to President Clinton about his decision to bomb the Al-Shifa factory outside Sudan's capital of Khartoum. I wrote a slew of articles at the time to prove that this wild Clintonian action was wag-the-doggery, pure and simple. (You can look it up if you like in my book No One Left To Lie To.) At that time, I interviewed a number of CIA people, both on and off the record, and came to the conclusion that it was the wrong factory in the wrong place and had been blitzed mainly because of Clinton's difficulties with Monica Lewinsky. The clincher was the direct plagiarism of his own hysterical speech of justification from the glib speech delivered by Michael Douglas, trying to de-knicker Annette Bening in the mediocre film The American President. If George Bush had even tried to pull anything like this, he would have been impeached by now, or so I hope.

Several senior CIA officials, and people in other departments, also let their dissent be known. I might instance Jack Downing, head of the agency's directorate of operations as well as the chief of the Africa bureau, and also Milton Bearden, veteran of many a covert op in Africa, who agreed to be interviewed by me for the record. On Oct. 27, 1999, the New York Times got around to publishing an article by James Risen in which it was made plain that Madeleine Albright had suppressed a report from the State Department's Bureau of Intelligence and Research casting grave doubt on the Al-Shifa intelligence. The only person who still maintains that the factory was Osama Bin Laden's place for mixing Saddam Hussein's chemicals is Richard Clarke, who has been rather quiet on that subject lately. (He could well have been right at that, but not about this particular factory: See my Slate article on Clarke's Sudan contradictions.)

That was an exceptionally rich harvest of high-level disagreement overridden by a sitting president. And it strengthened the case for, to put it no higher, more "transparency" in the famously overpaid and underperforming CIA. This case has become no weaker, to say the least, in the years of George Tenet and other Clinton holdovers who left us under open skies on Sept. 11, 2001.

But now, instead of being rewarded for her probity, Mary McCarthy has been given the sack. And the New York Times rushes to her aid, with a three-hankie story on April 23, moistly titled "Colleagues Say Fired CIA Analyst Played by the Rules." This is only strictly true if she confined her disagreement to official channels, as she did when she wrote to Clinton in 1998. Sadly enough, the same article concedes that McCarthy may have lied and then eventually told the truth about having unauthorized contact with members of the press.

Well! In that case the remedy is clear. A special counsel must be appointed forthwith, to discover whether the CIA has been manipulating the media. All civil servants and all reporters with knowledge must be urged to comply, and to produce their notes or see the inside of a jail. No effort must be spared to discover the leaker. This is, after all, the line sternly proposed by the New York Times and many other media outlets in the matter of the blessed Joseph Wilson and his martyred CIA spouse, Valerie Plame.

I have a sense that this is not the media line that will be taken in the case of McCarthy, any more than it was the line taken when James Risen and others disclosed the domestic wiretapping being conducted by the NSA. Risen's story is also the object of an investigation into unlawful disclosure. One can argue that national security is damaged by unauthorized leaks, or one can argue that democracy is enhanced by them. But one cannot argue, in the case of a man who says that his CIA wife did not send him to Niger, that the proof that his wife did send him to Niger must remain a state secret. If one concerned official can brief the press off the record, then so can another.

It has long been pretty obvious to me that the official-secrecy faction within the state machinery has received a gigantic fillip from the press witch hunt against Lewis Libby and Karl Rove. What bureaucrat could believe the luck of an editorial campaign to uncover and punish leaking? A campaign that furthermore invokes the most reactionary law against disclosure this century: the Intelligence Identities Protection Act? It was obvious from the first that the press, in taking Wilson and Plame at their own estimation, was fashioning a rod for its own back. I await the squeals that will follow when this rod is applied, which it will be again and again.

Joseph Wilson update: In my article last week on Wilson's utter failure to notice the visit of Saddam Hussein's chief nuclear diplomat to Niger, I mentioned his substitution of another Iraqi name—Mohammed Saeed al-Sahaf—as having just possibly approached some Niger businessmen and officials at an OAU summit in Algeria in 1999. Sahaf is now better known to us as the risible figure of "Baghdad Bob," which allowed Wilson to make mock of the whole thing. It is almost irrelevant when set beside the visit of Wissam al-Zahawie to Niger itself the same year, but at the time he attended the Algiers meeting, "Baghdad Bob" was—as I ought to have known and have since found out—Saddam Hussein's foreign minister. This fact is not mentioned in Wilson's terrible book, either. And Sahaf still had time to meet with some people from a tiny African state known only for its uranium!