Here’s hoping liberty prevails in Teheran. (I've changed the color in minor gesture of solidarity.) I understand that from the White House's point of view, it's all ... complicated. Indeed it is. But how hard is it to say, the United States stands for, and stands with, liberty?

UN Collective Security and the US Security Guarantee ... my new CJIL paper at SSRN

The Chicago Journal of International Law has a new symposium issue coming out on the “multipolar” world and its implications for international law and institutions. I’m pleased to say I have an article in the issue, titled “United Nations Collective Security and the United States Security Guarantee: The Security Council as Talking Shop of the Nations,” 10 Chicago Int’l Law Journal 1 (June 2009) pp. 55-90. I’ve posted it up to SSRN at the link. Here is the abstract, in case anyone is interested:

This essay considers the respective roles of the United Nations and the United States in a world of rising multipolarity and rising new (or old) Great Powers. It asks why UN collective security as a concept persists, despite the well-known failures, both practical and theoretical, and why it remains anchored to the UN Security Council. The persistence is owed, according to the essay, to the fact of a parallel US security guarantee that offers much of the world (in descending degrees starting with NATO and close US allies such as Japan, but even extending to non-allies and even enemies who benefit from a loose US hegemony in the global commons such as freedom of the seas (leaving aside pirates)) important security benefits not otherwise easily obtained.

Much of the world can afford to pay lip service to UN collective security as an ideal, and to nourish it as a Platonic form, precisely because they do not have to depend upon it in fact. Not all the world falls within even the broadest conception of the US security umbrella, however, and these places include such locales as Darfur and other conflict zones in Africa. In those places, according to the paper, the US should engage with UN collective security to offer what the US will not, or cannot, offer directly.

The essay also argues that those who want to see an end to loose US hegemony in favor of the supposed freedoms and sovereign equality of a multipolar world should think carefully about what they wish for. The dreams of global governance by international institutions turn out to have their greatest possibilities precisely in a world that, to a large extent, relies upon a parallel hegemon rather than collective institutions for its underlying order. In a multipolar, more competitive world, the winner is unlikely to be liberal internationalist global governance or UN Platonism or collective security, but instead the narrow, often directly commercial, interests of rising new powers such as China. The paper closes with policy advice to the United States on what it means and how it should - and should not - engage with the UN on security and the Security Council.

(The paper runs some 15,000 words and is part of a special symposium issue on a multipolar world.)

I should add that the paper also contains a substantial discussion of NATO and its relationship to the US security guarantee - with an emphasis on Raymond Aron, one of my intellectual heroes. The substance of the article figures into two chapters on security in my book on UN-US relations. 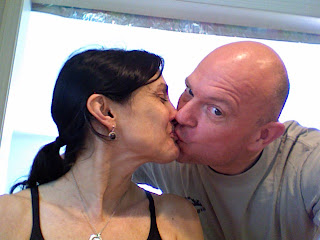 I fixed a turkey breast done in the slow cooker, very tender and juicy, and a bunch of vegetables grilled. The almond creme cake from the expensive baker was a disaster, though, with the crust ladened with enough salt to make us all gag. Anyway, Jean-Marie took this with her macbook built in camera.