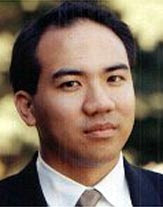 Mark Steyn's July 4, 2002 column, here. (We hosted a bbq for folks on our little DC cul-de-sac; I overcooked the burgers, as usual, visions of e coli dancing in my head, but otherwise things went fine. Also read over the Declaration of Independence with my daughter - the phrase that kept coming back to me, in relation to Steyn's column, is "consent of the governed.")

Julian Ku (photo at left) has a lovely July 4th note at Opinio Juris here - he is concerned about coming off all geeky on a holiday made for pool or beach. Okay, let me join the geeks (my wife and daughter would say no need to join, been there all along). In addition to Eugene Kontorovich's erudite exposition on how the phrase, "decent respect to the opinions of mankind" has morphed into such a meme for liberal internationalism, I expressed my own view of it in part of an article in Policy Review, here, that was actually about foreign law in US constitutional adjudication:

"Jefferson was referring ... not to justification of the practices of a settled constitutional order of several centuries, but instead to a society that was about to undertake revolution, rebellion, sedition, treason, confiscation, secession, and war against its lawful sovereign. The moment indeed warranted an explanation for why all that was justified, in terms that the rest of mankind might understand. Nine generations later, Justice Breyer might more accurately have said that consideration of the opinions of mankind was appropriate at, not from, the moment of the nation’s birth."

Without much doubt, however, confronted with that vision of unconsented international law, they would recognize Europe, the Europe left behind.