A couple of weeks at the Hoover Institution, Stanford University 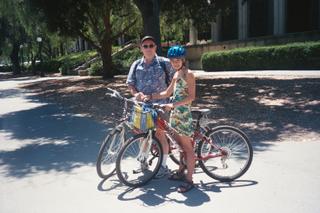 I am currently at the Hoover Institution, Stanford University (photo of Ken and Renee in front of the Hoover buildings), working on a short book manuscript tentatively titled "United Nations reform and the Limits of Global Governance," to be published by Rowman and Littlefield/Hoover Institution next year. The book is really a sort of extended essay between hard covers on the conceptual contradictions involved in serious UN reform and arguing, in effect, that UN reform at the level of the trees depends on how one sees the forest, which is really the forest of global governance. Your vision of global governance will powerfully influence how you see UN reform. So it is tying together a sort of grand conceptual discussion of global governance with a certain amount of nitty-gritty work on the details of UN reform as is now under discussion at the UN.

I've tentatively set out a number of contradictions in UN reform, centered around the question of sovereignty-democratic sovereignty-liberal internationalism divides as the heart of debates over global governance. I've tentatively divided these into two broad categories - good guys versus bad guys, and good guys versus good guys. What I mean by that division is that there are certain unavoidable controversies that arise in an organization that accepts good guys and bad guys at the same table - the Human Rights Commission is one such, but there are others, all fundamentally arising from the fact that an organization that accepts the good and the bad always has deep moral limitations. On the other hand, there are also certain unavoidable controversies that arise from the differences in vision even between the good guys - competing visions of global governance. UN reform has to begin from the understanding that some of these controversies are intractable - some of them good guy versus bad guy controversies and some of them good guy versus good guy controversies - and cannot be made to go away by artful and diplomatic forms of words. These intractable differences must be accepted as a matter of differences of power and values, realism and idealism, and therefore represent irreducible limits upon the scope, power, prestige, legitimacy, possibilities of action, and aspirations of the UN family of organizations. UN reform is partly about understanding possibilities of reform, but mostly about understanding reform as the acknowledgment of limits.

***
Well, that said, the fact is that Stanford is the loveliest place on earth - paradise, with perfect weather, warm and low humidity. To think that a few days ago my family and I were in the decidedly unparadisical weather of DC. The folks at the Hoover Institution are fabulous - it has many interesting people around, but also the ability to lock oneself away with a laptop, or go sit outside in the wonderful weather with a laptop. It's a great place to get around on a bike. It's the kind of place where either you get no work done whatsoever - or else you win the Nobel prize. And people are so ... so civilized here. (I say this as a Californian, but UCLA graduate.) But Stanford feels like everything Adam Ferguson and Adam Smith called for in civil society - a polite and polished commercial people. Best of what David Brooks called the bobos, the bohemian bourgeoisie.

Do I ever have to go home??